Does a Green-eyed Monster Dominate Your Thinking? 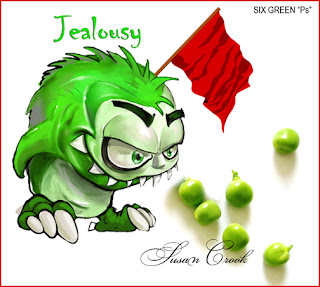 Instead, Saul was the one destroyed - by his own jealousy.

Ever allow the green-eyed monster - jealousy - to dominate your thinking?  Let's take a look at the SIX GREEN "Ps" that trigger jealousy red flags:


1)    POSSESSIONS - Someone has what you want - and you resent them for it. "Her house is so big."  His car is way too expensive."  "She owns too many shoes."
2)    POSITION - "Why does he get to be the coach?"  "I'm a better boss."  "He always gets the accolades."  That stinks.
3)    PRIVILEGE - So you weren't born into a family of privilege?  "They always go on nice vacations."  "She doesn't even have to work."  Not fair.
4)    PROMOTION - "Why did so-and-so get promoted instead of me? I've been there longer.  I do a better job and I wanted that job more!"
5)    PERFECT APPEARANCE - "Beautiful face, thick hair, perfect body.  I hate her." "I'm too tall, too short, wish I had better teeth." Worms, anyone?
6)    POPULARITY - "She's invited to everything."  "Everybody loves to hang around his office.  I'm just not outgoing like that." "His jokes aren't funny anyway."
Sound familiar?  Or have you got the "green gimmies?"  I want this.  I want that.  I want, want, want what I can't or don't have.
Seriously, is the grass really greener on the other side? If so, then consider that it was probably a lot of work!

Saul's son, Jonathan, would have been in line to become the next king.  God said "change of plans." Jonathan's response?  He supported David becoming king in every way - because it was God's way. Jonathan even encouraged David, helped him, and saved his life.  His focus was God's focus - and not through any "green eye."

Saul destroyed his life because of his lack of controlling the green-eyed monster - jealousy - in his life.  Jealousy kills and destroys.  James 3:16 "Where jealousy and selfishness are there will be confusion and every kind of evil." Jealousy is the root of many problems in our lives.

What we’re dealing with today is not some petty nuisance or minor weakness in our lives. The Bible says it will rot the bones! It’s from the pit of hell - the devil himself.

So what's the "Remedy for Jealousy."  Stay tuned! Later this week we'll find out.  Don't miss it!
Posted by Susan Crook at 3:51 PM

What Are Your Expectations Today?

Saul's highest expectation that particular day was to simply locate his father's lost donkeys (1 Samuel 9). God's plan for the day was to anoint Saul KING over all Israel! What are your expectations for your day today? Are they limited to your perspective - small dreams, little hope, feelings of inadequacy or mediocre achievements? Aim for what God has in store for you today. Settle for nothing less than to expect His best! 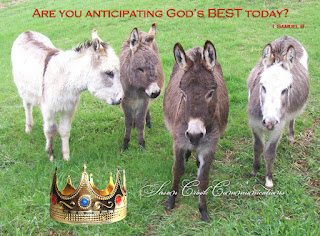